By subscribing in the MEDEAS newsletter, you agree to receive emails with newsletters from MEDEAS project and other information relevant to the project outcomes and dissemination activities.

The only personal data that we hold on the MEDEAS newsletter mailing list is your name, organisation and email address.

We hold your information for the following purposes:

Our emails are sent via Mailchimp provider on the basis of a processing agreement.

This Software is open-source and licensed under the following conditions as stated by MIT/X License. (See http://www.opensource.org/licenses/mit-license.php ).

The Software is provided as is, without warranty of any kind, expressed or implied, including but not limited to the warranties of merchantability, fitness for a particular purpose and noninfringement. In no event shall the authors be liable for any claims, damages or other liabilities, whether in an action of contract, tort or otherwise, arising from, out of or in connection with the Software or the use or other dealings in the Software.

MEDEAS-World model is a global, one region-aggregated economy-energy-environment model (or Integrated Assessment Model, IAM) which runs from 1995 to 2050.

MEDEAS-World model serves as framework for the development and evolution of the European model version, which is the core of the MEDEAS project.

MEDEAS-World model has been designed applying System Dynamics, which facilitates the integration of knowledge from different perspectives as well as the feedbacks from different subsystems.

MEDEAS-World model consists of a modular and flexible structure, where each module can be expanded/simplified/replaced by another version or submodel. The model is structured into 7 submodules:

The modules of economy and energy are the most extensive and reach the highest degree of disaggregation. Interrelations between the 7 modules: the main variables that connect the different modules are represented by arrows. Most modules have bi-directional linkages, excepting for the Land-use and Social and Environmental impacts indicators which mainly report outputs from the simulations without feed-backing to rest of the structure. 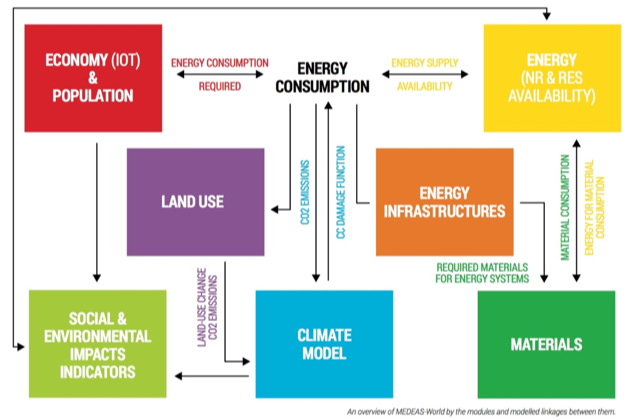 This way, MEDEAS-World incorporates three limits to growth that are rather rarely considered in the literature: energy availability taking into account biophysical and temporal constraints, declining EROI levels and consistent climate change impacts.

How does the Model function?

The dynamic energy availability is given by stocks and flows limitations of non-renewable fuels –i.e. peak oil phenomena-, sustainable potential of renewables, realistic rhythms of technology deployment, etc. In the case that the final energy demands are lower than the final energy availability, the demand is fulfilled. If the opposite is true, the final demand adapts to the available final energy. In any case, the demand of the next time-period is estimated taking as reference the consumption in the previous time-period.

The consumption of final energy by final fuels is covered by a mix of technologies (infrastructures module), which derives in the consumption of primary energy. Special attention is devoted to the consideration in MEDEAS framework of those technologies which seem to be realistically available and with a positive net energy balance.

Material availability does not directly constrain the deployment of technologies given the uncertainty in the available metrics of reserves and resources. However, the model detect potential mineral scarcities.

The modules of land-use and social and environmental impacts indicators allow to account for the land requirements of the RES energies, as well as to contextualize the implications for human societies in terms of well-being for each simulation.

Limitations and use of the model

Despite the challenges encountered with the development of the model, there are still many limitations and uncertainties. Hence, the interpretation of the results must be done with caution. MEDEAS-World is not intended to predict the future, but rather to qualitatively guide the best options for the energy transition towards a low carbon economy. It is a tool to explore strategies, not specific policies, since the latter are applied at a different (reduced) political scale. The model obtained can still be modified and expanded, depending on the availability of new data or new information, but the current version provides a solid enough basis to serve as a framework for the European scale model.