Chronicle of the MEDEAS workshop in Club of Rome Summer Academy in Florence (September 9, 2017) 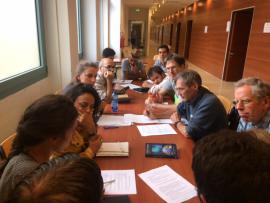 Six researchers from four institutions from the MEDEAS consortium organized a session at the Club of Rome Summer Academy in Florence on September 9, 2017. The workshop had two main objectives: (1) present the MEDEAS project; and (2) allow the participants to “run” the global version of the model in a participative simulation game. There was great interest from the start, and around 60 people attended the workshop.

Section 1: Presentation of the MEDEAS project to the audience

The coordinator of the project, Jordi Solé (ICM-CSIC) started the session explaining the aims, methods and main particularities of the MEDEAS suite of models in relation to the literature. In particular, the need to go beyond usual linear-optimization models and use open-software programming to enhance transparency and legitimacy of the model were highlighted. Ilaria Perissi and Sara Falsini (INSTM) presented the work performed in relation to the design of future scenarios of global GHG emissions. Applying the concept of carbon budget, they showed that global emissions should reduce at a rate of around -4%/yr (-11%/yr) in the case of starting to apply mitigation policies from 2020 (2030). These numbers were subsequently used in the participative simulation game as reference for the global GHG 2050-aims. Davide Natalini (ARU) compared the MEDEAS approach with the state of the art of the literature (in particular with TIMES-MARKAL and LEAP), highlighting its particularities and advances. Iñigo Capellán-Pérez (UVa) concluded the first part of the workshop by overviewing the current version of MEDEAS-World model, describing the modules and the main dynamics within them.

Section 2: Instructions on how to play the participatory simulation game with MEDEAS-W

After the coffee break, we proceeded with the second part of the workshop, which consisted of a participative simulation game designed by UVa team and coordinated by Iñigo Capellán-Pérez. In this game, the participants apply the preliminary available version of MEDEAS-World model. Before being divided into 3 teams, the general rules and dynamics of the game were explained. Each team received an informative document and a form to fill, where they could select a consistent combination of model hypotheses and specific targets in order to:

In relation to the second aim, participants were able to choose between aiming at “EU-like standards” or at covering the basic standards of life (i.e. above 70 years life expectancy, full access to water, sanitation, electricity and other basic infrastructures). In other words, the participants faced the challenge of finding strategies to respect planetary boundaries without transgressing social boundaries. Among the specific targets, they had to choose between different levels of population evolution, a desired GDP per capita growth trend, the growth rate of renewable energy technologies, efficiency improvements, inequality levels, year of implementation of actions, etc. During the MEDEAS members where available as facilitators although it should be said that most groups excellently self-regulated most of the time.

Discussions were deep, well-reasoned and highly interesting. In general, the participants had a very good knowledge about the issues at stake. Consensus was not always easy to achieve given the high number of participants per group; however, we were constrained to have “big” groups due to the time required to implement the scenarios in the model. Different profiles of participants emerged: “optimists”, “realists”, “catastrophists”, “dreamers”, etc. A key point of discussion revolved around the need of implementing quick and substantial policy targets to reach the 2050-aims and the “likelihood” of these happening in the time and scale required in the next few decades.

After the group discussions, a spokesperson of each group shared with the rest of participants the main decisions and justifications. This way, the different rationales could be compared.

Finally, the results of the simulations were shown to everybody. Starting with the question if the 2050-aims (GHG emissions and well-being targets) had been achieved. It is worth mentioning that just 1 team out of 3 managed to achieve its 2050-aims. They succeeded through a combination of high renewables capacity growth and a planned decrease in GDPpc and population from the year 2020 (for more information read a post written by one of the participants from this group). The exercise finalized with the explanation of the obtained results to the participants. This part was particularly interesting for those participants who had the opportunity to contrast their “mental” models with a “formal” model. Targets and strategies they thought were sufficient to attain the 2050-aims proved to be not sufficient (under the assumptions considered). Limits to growth in terms of availability of resources (in combination with declining EROI when the penetration of renewable energies increase) and climate change proved to be determinant factors.

The exercise proved to be a very fruitful one: the participants had the opportunity to learn about global energy issues and mitigation strategies through interactive dynamics. Despite the length of the game (>3 hours), MEDEAS organizers, unfortunately, did not have time to respond to all questions and we apologize for the fact that some results remained unexplained. Also from the perspective of the organizers, it was very enriching to get feedback from the project and the global model and to see the tool we are developing starting to be applied outside of the project. We have learnt from this very interesting experience and we hope to repeat it in the future with an improved version of the game (and the model). Do not hesitate to contact us if you are interested to play it!